The set-up of a simple but accurate method to investigate CTT at the Sahlgrenska Hospital Gastro Unit was prompted by the high number of referrals for constipation in the early 1980’s, the relatively high number of colectomies for constipation on weak grounds, and a need to study effects of drugs on CTT. In 1984 Hasse Abrahamsson and Bernhard Jaup observed in colonic transit studies with a modified Becker-Ellsborg method that healthy women ingesting radiopaque markers for three consecutive days, could have all markers retained at X-ray on day 4. Thus, such a 4-day single X-ray method cannot discriminate between normal and delayed CTT in women. In 1987 Metcalf et al came to the same conclusion (Metcalf et al Gastroenterology 1987;92:40-7). 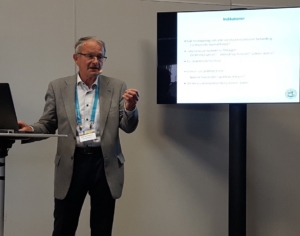 For these reasons, Abrahamsson and Antov decided in 1985 to replace the principle to follow 1-3 doses of markers along to colon. In stead, a simple saturation test for measurement of CTT was elaborated with the capacity to measure both total and segmental transit times. Two principles were tested in healthy subjects: a) marker intake for 6 days followed by X-ray on day 7, and b) daily marker intake for 8 days with X-ray on day 9. The former principle was found simple and proved to be sufficient to reach an equilibrium (saturation state) in all healthy subjects and was selected for enlarged studies: Ingestion of 10 markers daily for 6 days followed by a single abdominal radiograph on day 7. In the saturation state 10 retained markers represent one day and each marker represents 1/10 of a day, i.e. 2.4 hours.

By March 1986 fifty healthy subjects had been investigated and an Abstract was submitted to the 3rd European Gastrointestinal Motility Meeting, Bruges, Belgium. This first official, poster presentation of the method was also elected for oral presentation on June 19, 1986.

In August 1986 the study of 56 healthy subjects was completed. The Abstract submitted to the Swedish Medical Society Meeting was presented in Stockholm on December 4, 1986.

In the beginning of 1987, a study on patients with severe constipation was completed with the new method. The markers for clinical use were named TRANSIT-PELLETS. An Abstract comparing patients and controls was presented at the 20th Scandinavian Conference on Gastroenterology in Trondheim 13th June, 1987. 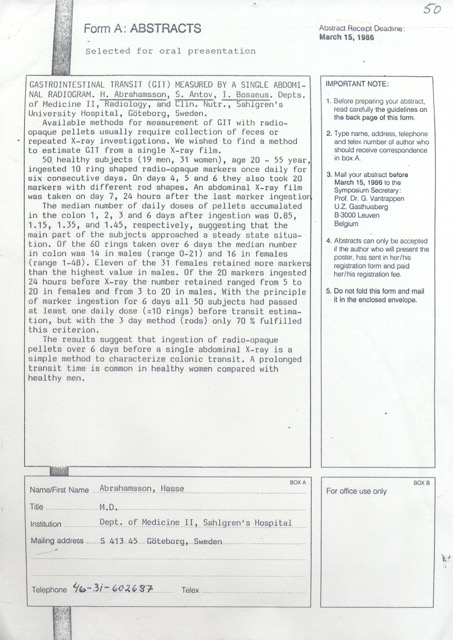 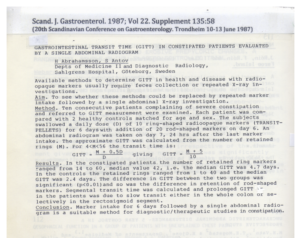 1987, the year Transit-Pellets™ was baptised

In October 1987 the Transit-Pellets method and clinical results were presented at the 1st SAGIM Meeting in Oslo and published as full paper in the symposium book (Abrahamsson et al. Scand J gastroenterol 1988, Suppl 152:72-80). The possibility to also measure rapid CTT by shortening the interval between last marker dose and X-ray was pointed out in the Discussion. In these early publications the CTT was calculated as the mean 50% excretion time of the markers (M+5/10) where M is the number of markers retained in colon at X-ray. This was an adaptation to the principle used in Sheffield and elsewhere in UK to calculate CTT as the time for excretion of 50% of a marker dose to feces.

In 1990 a SAGIM working team consensus report recommended this method for measurement of colonic transit time in clinical practice and in scientific studies. It was recommended that (instead of 50% excretion time) results are calculated as oroanal (mouth-to-anus, OATT) transit time, i.e. M/10 yielding OATT in days (Europ. J Surg 1990. Suppl. 564:63-71).

1990’s. The increasing interest at the Sahlgrenska Gastroenterology Section in the pathophysiology of functional and other diarrheal disorders prompted a modification of the transit test: by dividing the marker dose on day 6 into two doses taken 24 and 12 hours before X-ray, rapid transit could be measured with enhanced precision. Several aspects of rapid transit were covered by Riadh Sadik in his thesis and Sadik also presented updated reference values (Sadik et al Scand J Gastroenterol. 2003;36-42)

In the last decade the feasibility of the Transit-Pellets method for evaluation of colonic transit in various functional and diarrheal disorders, and for evaluation of treatments, has repeatedly been reported by Magnus Simrén, MD PhD, Hans Törnblom, MD PhD and co-workers. In the same time period several international companies in e.g. UK, Germany, Denmark and US have copied the original Transit-Pellets method including that the whole marker dose on day 6 is taken 24 hours before X-ray. However, these copies should be of limited value since the rapid part of the transit spectrum in functional gut disorders cannot be sufficiently covered by these versions.